WELCOMES YOU and hopes you will enjoy having dinner with us. Caruso’s was started in the 1930’s by Nicasio “Caruso” Zagona, and has remained in the family since then. Tucson’s original Caruso’s was located about a block south of its present site. An August rainstorm and flood literally washed the place away, so we moved to higher ground, where we’ve remained for the past seventy years or so.

The restaurant’s interior layout, its patio and most of its food preparation methods were developed by the senior Zagona, although inevitably some changes have been made through the years. We now have more efficient equipment, of course, but the techniques for making our pasta (for pizza, ravioli, lasagne, manicotti and cannelloni) and our homemade sauces are basically the same.

The heart of the place is the “big copper pot,” visible from the main dining room. This pot has contained all the Caruso sauce served since our first days in Tucson. We trust that you will find the sauce from this pot — and everything else at Caruso’s -as good as it was when served by the master chef — “Caruso” — himself. 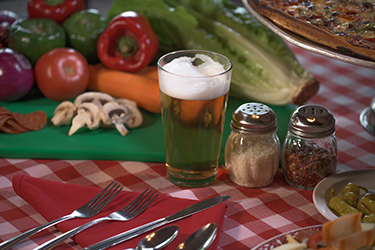 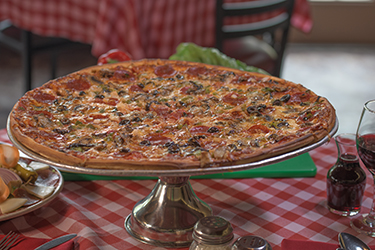 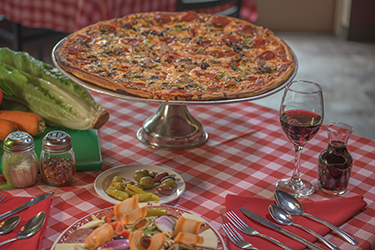 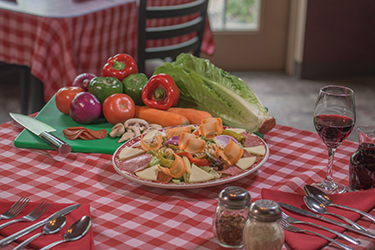 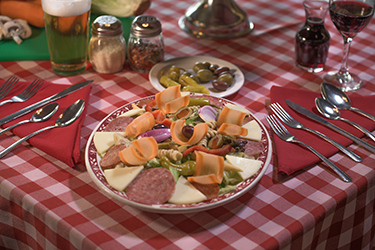 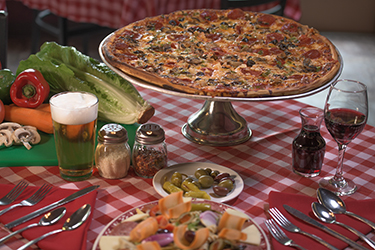 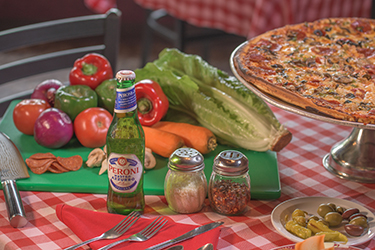 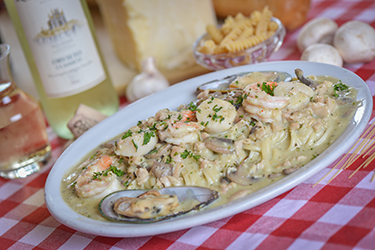 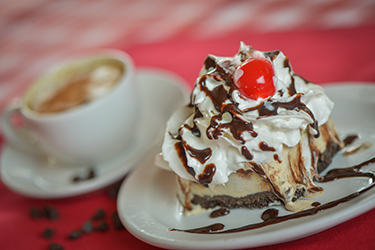 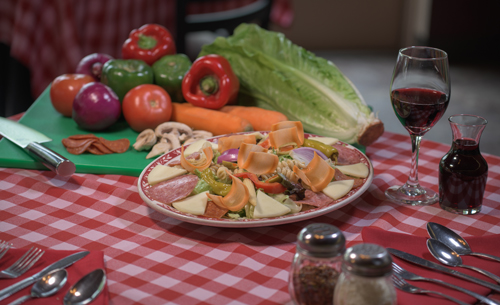 A combination of ALL these traditional Italian Favorites:
•Spaghetti ­­ •Meatballs ­­ •Meat & Cheese Ravioli
Served with your choice of Meat sauce, Marinara sauce, or White Garlic-Mushroom sauce.
$16.75

Spaghetti, Penne, Linguine or Rigatoni
Served with your choice of sauces listed below . . . $ 14.50

Homemade, Choice of Meat (in egg pasta) or Cheese (in spinach-egg pasta)
Served with your choice of sauces listed below . . . $ 18

The “Half and Half”

Served with Garlic Toast
Lasagne al Forno . . . $ 16.75
Our all-time favorite, made with homemade noodles, layered with a cheese-meat sauce, and baked in a blanket of cheese.

Vegetarian Lasagne . . . $ 18
Homemade noodles, layered with spinach, broccoli, mushrooms, and a variety of cheeses. Covered with a red sauce and baked under a blanket of cheese.

A Seafood-Pasta Delight! . . . $ 25
A variety of seafoods in a white sauce (garlic, fresh herbs, white wine and mushrooms) or a red marinara sauce. Served on spaghetti.

Chicken Tetrazzini. . . $ 18
Chunks of chicken breast in a creamy white sauce with mushrooms and peas, baked over penne with a crunchy cheese topping.

Stuffed Shells and Eggplant Parmigiana. . . $ 20
The shells are stuffed with ricotta and Parmesan cheeses, and, together with eggplant, are baked parmigiana style.

Eggplant Parmigiana. . . $ 16.75
Broiled eggplant wedges, covered with a red sauce and a variety of cheeses, and baked.

Cheese Manicotti. . . $ 17.50
Homemade spinach pasta tubes, filled with ricotta and Parmesan cheeses. Covered with a red sauce, a variety of cheeses, and baked.

Breasts of Chicken Parmigiana . . . $ 19.75
Two boneless chicken breasts covered with a red sauce, topped with mushrooms, a variety of cheeses, and baked.
Stuffed Pasta Shells and Chicken Parmigiana. . . $ 19.75
A boneless chicken breast and mushrooms with cheese-stuffed pasta shells, covered with marinara sauce and a variety of cheeses, and baked.

Spinach Cannellone. . . $ 18.75
Homemade egg pasta rolled and stuffed with spinach, cheese, and mushrooms, all seasoned with herbs and baked in a red sauce covered with cheese.

Chicken and Eggplant, Sicilian Style . . . $19.75
Braised chicken breast, eggplant wedges and mushrooms, covered with a tangy red sauce (or, if you prefer, a white garlic sauce) and baked with a cheese topping.

WE PREPARE ORDERS TO TAKE OUT

Please see our wine menu for a complete listing of wines and bottled beer. 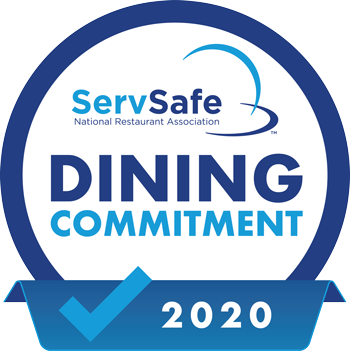